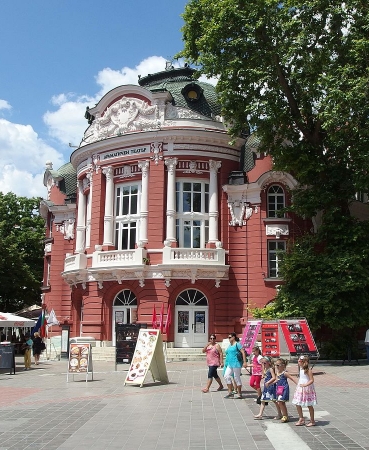 Varna Opera House was registered under the name of Varna Public Opera House on 6th April, 1947 and was officially opened on 1st August of the same year. Stefan Nikolaev was appointed as its first Director and Peter Raichev, the distinguished Bulgarian singer, was invited as the first Art Director.

Being an experienced artist with a good command of the staging and directing process, Peter Raichev selected fifteen young, talented and enthusiastic singers for the soloist cast. An orchestra, a choir and a ballet group were also formed under the leadership of the young conductor Ruslan Raichev, the choir-master Dimiter Mladenov and the choreographer Assen Manolov. The cast, including the stage designers Asen Popov and Vladimir Misin, prepared the first stage production - the opera "The Bartered Bride" by B. Smetana, within less than a month.

In the first two seasons alone, more than ten performances were staged, predominantly titles from the world opera classics - "Madama Butterfly", "Cavalleria Rusticana", "La Traviata", "Tosca", "La Boheme". The history of the Varna Opera was marked by the contributions of many conductors, singers, ballet dancers, composers, directors, choreographers, and scenographers.

In its quest to broaden its audience, the troupe staged a number of operettas, mainly the classics in the genre: Offenbach, Strauss, Lehar, Kalman, etc. The opera house has also staged modern musicals and a number of children's productions.

In 1999 the Varna Opera House merged with Varna Philharmonic Orchestra and continued its mission as a state cultural institution under a new name - Opera and Philharmonic society - Varna. The halls where the productions and concerts are staged are in Stoyan Bachvarov Drama Theatre (550 seats), Summer Outdoor Theatre - Varna (2400 seats) and Festival and Congress Center - Varna (800 seats).